UPDATE: Starting from smooth v 2.5.0, the model and the respective functions have changed. Now instead of calling the parameter intermittent and working with iss(), one needs to use occurrence and oes() respectively. This post has been updated on 25 April 2019.

One of the features of functions of smooth package is the ability to work with intermittent data and the data with periodically occurring zeroes.

Intermittent time series is a series that has non-zero values occurring at irregular frequency (Svetuknov and Boylan, 2017). Imagine retailer who sells green lipsticks. The demand on such a product will not be easy to predict, because green colour is not a popular colour in this case, and thus the data of sales will contain a lot of zeroes with seldom non-zero values. Such demand is called “intermittent”. In fact, many products exhibit intermittent patterns in sales, especially when we increase the frequency of measurement (how many tomatoes and how often does a store sell per day? What about per hour? Per minute?).

The other case is when watermelons are sold in high quantities over summer and are either not sold at all or sold very seldom in winter. In this case the demand might be intermittent or even absent in winter and have a nature of continuous demand during summer.

smooth functions can work with both of these types of data, building upon mixture distributions.

In this post we will discuss the basic intermittent demand statistical models implemented in the package.

First, it is worth pointing out that the approach that is used in the statistical methods and models discussed in this post assumes that the final demand on the product can be split into two parts (Croston, 1972):

This can be represented mathematically by the following equation:
\begin{equation} \label{eq:iSS}
y_t = o_t z_t ,
\end{equation}
where \(o_t\) is the binary demand occurrence variable, \(z_t\) is the demand sizes variable and \(y_t\) is the final demand. This equation was originally proposed by Croston, (1972), although he has never considered the complete statistical model and only proposed a forecasting method.

There are several intermittent demand methods that are usually discussed in forecasting literature: Croston (Croston, 1972), SBA (Syntetos & Boylan, 2000) and TSB (Teunter et al., 2011). These are good methods that work well in intermittent demand context (see, for example, Kourentzes, 2014). The only limitation is that they are the “methods” and not “models”. Having models becomes important when you want to include additional components and produce proper prediction intervals, need the ability to select the appropriate components and do proper statistical inference. So, John Boylan and I developed the model underlying these methods (Svetunkov & Boylan, 2017), based on \eqref{eq:iSS}. It is built upon ETS framework, so we call it “iETS”. Given that all the intermittent demand forecasting methods rely on simple exponential smoothing (SES), we suggested to use ETS(M,N,N) model for both demand sizes and demand occurrence parts, because it underlies SES (Hyndman et al., 2008). One of the key assumptions in our model is that demand sizes and demand occurrences are independent of each other. Although, this is an obvious simplification, it is inherited from Croston and TSB, and seems to work well in many contexts.

Having this statistical model, makes it extendable, so that one can add trend, seasonal component, or exogenous variables. We don’t discuss these elements in our paper, but it is briefly mentioned in the conclusions. And we don’t discuss these features just yet, we will cover them in the next post.

Now the main question that stays unanswered is how to model the probability \(p_t\). And there are several approaches to that:

In case (1) the model is very basic, and we can just estimate the value of probability and produce forecasts. In cases of (2) – (5), we suggest using another ETS(M,N,N) model as underlying each of these processes. So when it comes to producing forecasts, in both cases we assume that future level of probability will be the same as the last obtained one (level forecast from the local-level model). After that the final forecast is generated using:
\begin{equation} \label{eq:iSSForecast}
\hat{y}_t = \hat{p}_t \hat{z}_t ,
\end{equation}
where \(\hat{p}_t\) is the forecast of the probability, \(\hat{z}_t\) is the forecast of demand sizes and \(\hat{y}_t\) is the final forecast of the intermittent demand.

In order to distinguish the whole model \eqref{eq:iETS}, the demand sizes and the demand occurrence parts of the model, different names are used. For example, iETS\(_G\)(M,N,N) would refer to the full model \eqref{eq:iETS}, (\(y_t\)), oETS\(_G\)(M,N,N) would refer to the occurrence part of the model (\(o_t\)) and ETS(M,N,N) refers to the demand sizes part (\(z_t\)). In all these three cases the “(M,N,N)” part indicates that the exponential smoothing with multiplicative error, no trend and no seasonality is used. The more advanced notations for the iETS models are available, but they will be discuss in the next post. For now we will stick with the level models and use the shorter names.

Summarising advantages of our framework:

If you need more details, have a look at our working paper (have I already advertise it enough in this post?).

The aforementioned model with different occurrence types is available in smooth package. There is a special function for demand occurrence part, called oes() (Occurrence Exponential Smoothing) and there is a parameter in every smooth forecasting function called occurrence, which can be one of: “none”, “fixed”, “odds-ratio”, “inverse-odds-ratio”, “direct”, “general” or “auto”, corresponding to the sub types of oETS discussed above. The “auto” option selects the best occurrence model of the five. For now we will neglect this option and come back to it later.

So, let’s consider an example with artificial data. We create the following time series:

This way we have an artificial data, where both demand sizes and demand occurrence probability decrease over time in a step-wise manner, each 25 observations. The generated data resembles something called "demand obsolescence" or "dying out demand". Let’s start by fitting those five models for the demand occurrence part:

By looking at the outputs, we can already say that oETS\(_I\) model performs better than the others in terms of information criteria - it has the lowest AIC, as well as the other criteria. This is because this model is more suitable for cases, when demand is dying out, as it focuses on demand non-occurrence. Note that the optimal smoothing parameter for the oETS\(_O\) is quite high. This is because the model is more focused on demand occurrences. If the demand was building out, not dying out in our example, the situation would be different: the oETS\(_O\) would have a lower parameter and oETS\(_I\) would have the higher one. Note that the initial level of oETS\(_I\) is equal to 0.116, which corresponds to \(\frac{1}{1+0.116} \approx 0.89\), which is the probability of occurrence at the beginning of time series.

Note also, that the oETS\(_G\) does not print out details, because it has two models (called modelA and modelB in R), each of which has their own parameters. Here are the outputs of both these models:

Note that oETS\(_G\) and both models A and B have the same likelihood, because they are all parts of one and the same thing. However, the information criteria differ because they have different number of parameters to estimate: models A and B have 2 parameters each, which means that the whole model has 4 parameters. Also, note that the model A has the smoothing parameter equal to zero, which means that there is no updated of states in that part of model. We will come back to this observation in a moment. 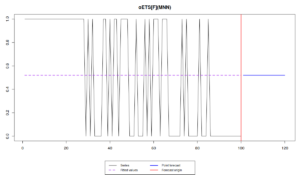 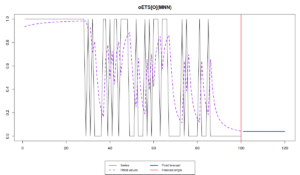 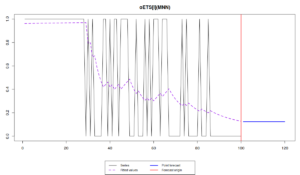 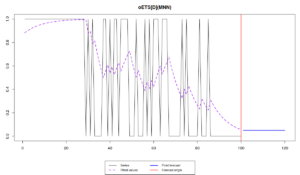 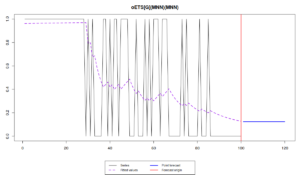 Note that the different models capture the probability differently. While oETS\(_F\) averages out the probability, all the other models react to the changes in the data, but differently:
odds ratio model is more reactive and seems not to do a good job, trying to keep up after the changes in the data; inverse odds ratio is much smoother; the direct probability model is more reactive, but not as reactive as the odds ratio one; finally the general model replicates the behaviour of the inverse odds ratio model. The latter happens because, as we have seen from the output above, model A in oETS\(_G\) is not updating the states, which means that the general and more complicated model reverts to the special case of oETS\(_I\). Still, it is worth mentioning that all the models predict that the probability will be quite low, which corresponds to the data that we have generated.

Although we could have tried out the more complicated ETS models for the demand occurrence, we will leave this to the next post.

In order to deal with the intermittent data and produce the forecasts for the whole time series, we can use either es(), or ssarima(), or ces(), or gum() - all of them have the parameter occurrence, which is equal to "none" by default. We will use an example of ETS models. In order to simplify things we will use iETS\(_I\) model (because we have noticed that it is more appropriate for the data than the other models): 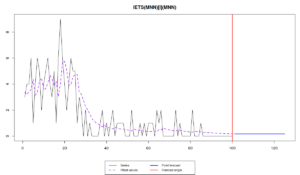 The forecast of this model is a straight line, close to zero due to the decrease in both demand sizes and demand occurrence parts. However, knowing that the demand decreases, we can use trend model in this case. And the flexibility of the approach allows us doing that, so we fit ETS(M,M,N) to demand sizes: 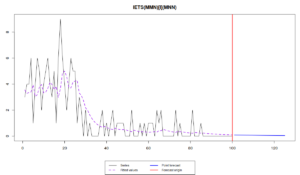 The forecast in this case is even closer to zero and reaches it asymptotically, which means that we foresee that the demand on our product will on average die out.

We can also produce prediction intervals and use model selection for demand sizes. If you know that the data cannot be negative (e.g. selling tomatoes in kilograms), then I would recommend using the pure multiplicative model: 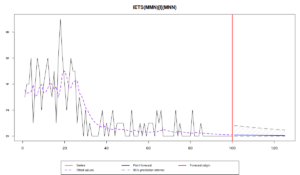 As we can see, the multiplicative trend model appears to be more suitable for our data. Note that the prediction intervals for the model are narrowing down, which is due to the decrease of level of demand. Compare this graph with the one when the pure additive model is selected: 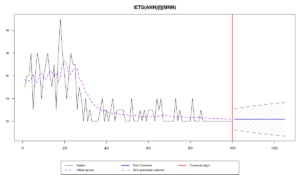 In the latter case the prediction intervals cover the negative part of the plane which does not make sense in our context. Note also that the information criteria are lower for the multiplicative model, which is due to the changing variance in sample for each 25 observations.

The important thing to note is that although multiplicative trend model sounds solid from the theoretical point of view (it cannot produce negative values), it might be dangerous in cases of small samples and positive trends. In this situation the model can produce exploding trajectory, because the forecast corresponds to the exponent. I don’t have any universal solution for this problem at the moment, but I would recommend using ETS(M,Md,N) (damped multiplicative trend) model instead of ETS(M,M,N). The reason why I don’t recommend ETS(M,A,N), is because in cases of negative trend, with the typically low level of intermittent demand, the updated level might become negative, thus making model inapplicable to the data.

As you see, there is now five new options for the models, which might complicate things in practice. Now we need to understand, how to select the most appropriate model for the demand occurrence between these five and how to make them more flexible, so that the trend and seasonal components are taken into account in demand occurrence, potentially together with some explanatory variables. If we can have a model that does all that, it would make it universal for a wide variety of data... One could only dream... right?