Previously we’ve covered the basics of exogenous variables in smooth functions. Today we will go slightly crazy and discuss automatic variables selection. But before we do that, we need to look at a Santa’s little helper function implemented in smooth. It is called xregExpander(). It is useful in cases when you think that your exogenous variable may influence the variable of interest either via some lag or lead. Let’s say that we think that BJsales.lead discussed in the previous post influences sales in a non-standard way: for example, we believe that today’s value of sales is driven by the several values of that variable: the value today, five and 10 days ago. This means that we need to include BJsales.lead with lags. And xregExpander() from the greybox package allows automating this for us:

The newXreg is a matrix, which contains the original data, the data with lag 5 and the data with lag 10. However, if we just move the original data several observations ahead or backwards, we will have missing values, so xregExpander() fills in those values with the forecasts using es() and iss() functions (depending on the type of variable we are dealing with). This also means that in cases of binary variables you may have weird averaged values as forecasts (e.g. 0.7812), so beware and look at the produced matrix. Maybe in your case it makes sense to just substitute these weird numbers with zeroes...

You may also need leads instead of lags. This is regulated with the same "lags" parameter but with positive values:

Once again, the values are shifted, and now the first 7 values are backcasted.

After expanding the exogenous variables, we can use them in smooth functions for forecasting purposes. All the rules discussed in the previous post apply:

But what should we do if we have several variables and we are not sure what lags and leads to select? This may become a complicated task which can have several possible solutions. smooth functions provide one. I should warn you that this is not necessarily the best solution, but a solution. There is a function called stepwise() in greybox that does the selection based on an information criterion and partial correlations. In order to run this function the response variable needs to be in the first column. The idea of the function is simple, it works iteratively the following way:

This way we do not do a blind search, but we follow some sort of "trace" of a good model: if some significant part that can be explained by one of the exogenous variables is left in the residuals, then that variable is included in the model. Following correlations makes sure that we include only meaningful (from technical point of view) things in the model. Using information criteria allows overcoming the problem with the uncertainty of statistical tests. In general the function guarantees that you will have the model with the lowest information criterion. However this does not guarantee that you will end up with a meaningful model or with a model that produces the most accurate forecasts. And this is why evolution has granted human beings the almighty brain – it helps in selecting the most appropriate model in those cases, when statistics fails.

Let’s see how the function works with the same example and 1 to 10 leads and 1 to 10 lags (so we have 21 variables now). First we expand the data and form the matrix with all the variables:

This way we have a nice data frame with nice names, not something weird with strange long names. It is important to note that the response variable should be in the first column of the resulting matrix. After that we use our magical stepwise function:

And here’s what it returns (the object of class “lm”):

The values in the function are listed in the order of most correlated with the response variable to the least correlated ones. The function works very fast because it does not need to go through all the variables and their combinations in the dataset.

Okay. So, that’s the second nice function in smooth that you can use for exogenous variables. But what does it have to do with the main forecasting functions?

The thing is es(), ssarima(), ces(), ges() - all the forecasting functions in smooth have a parameter xregDo, which defines what to do with the provided exogenous variables, and by default it is set to "use". However, there is also an option of "select", which uses the aforementioned stepwise() function. The function is applied to the residuals of the specified model, and when the appropriate exogenous variables are found, the model with these variables is re-estimated. This may cause some inaccuracies in the selection mechanisms (because, for example, the optimisation of ETS and X parts does not happen simultaneously), but at least it is done in the finite time frame.

Let’s see how this works. First we use all the expanded variables for up to 10 lags and leads without the variables selection mechanism (I will remove the response variable from the first row of the data we previously used): 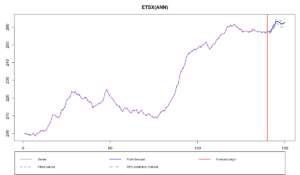 BJsales series and ETSX with all the variables

As we see, the forecast became more accurate in this case than in the case of using pure BJsales.lead, which may mean that there can be a lagged relationship between the sales and the indicator. However, we have included too many exogenous variable, which may lead to the overfitting. So there is a potential for the accuracy increase if we remove the redundant variables. And that’s where the selection procedure kicks in: 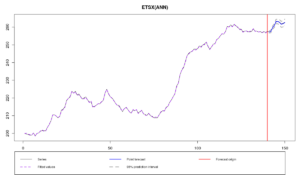 BJsales series and ETSX with the selected variables

The xreg selection works even when you have combination of forecasts. The exogenous variables are selected for each model separately in this case, and then the forecasts are combined based on IC weights. For example, this way we can combine different non-seasonal additive ETS models:

Taking that ETSX(A,N,N) is significantly better in terms of AICc than the other models, we end up with a maximum weight for that model and infinitesimal weights for the others. That’s why the forecasts of the ourModelSelect and ourModelCombine are roughly the same. Starting from v2.3.2, es() function returns the matrix of information criteria for different models estimated in the process, so we can see what was used and what were the values for the models. This information is available through the element ICs:

Finally, it is worth noting that the variables selection approach we use here puts more importance on the dynamic model (in our examples it is ETS) rather than on the exogenous variables. We use exogenous variables as an additional instrument which allows increasing the forecasting accuracy. The conventional econometrics approach would be the other way around: construct regression, then add dynamic components to that in case you cannot explain the response variable with the available data. This approach has different aims and leads to different results.