While the previous posts on es() function contained two parts: theory of ETS and then the implementation – this post will cover only the latter. We won’t discuss anything new, we will mainly look into several parameters that the exponential smoothing function has and what they allow us to do.

We start with initialisation of es().

History of exponential smoothing counts dozens of methods of initialisation. Some of them are fine, some of them are very wrong. Some of those methods allow preserving data, the others unnecessarily consume parts of time series. I have implemented ETS in a way that allows initialising it before the sample starts. So the state vector \(v_t\) discussed in parts 2 and 3, is defined before the very first observation \(y_1\). This is consistent with Hyndman et al. (2008) approach. Still this initial value can be defined using different methods:

While the optimisation works perfectly fine on monthly data, there may be some problems with weekly and daily seasonal data. The reason for that is a high number of parameters that need to be estimated. For example, ETS(M,N,M) on weekly seasonal data will have 52 + 1 + 2 + 1 = 56 parameters to estimate (52 seasonal indices, 1 level component, 2 smoothing parameters and 1 variance of residuals). This is not an easy task which sometimes cannot be efficiently solved. That is why we may need other initialisation methods.

Let’s see what happens when we encounter this problem in an example. I will use time series taylor from forecast package. This is half-hourly electricity demand data. It has frequency of 336 (7 days * 48 half-hours) and is really hard to work with when the standard initialisation is used. Let’s see what happens when es() is applied with model selection and a holdout of one week of data:

We had to estimate 340 parameters and the model selection took 18 seconds (checking only 5 models in the pool). We ended up with the following graph: 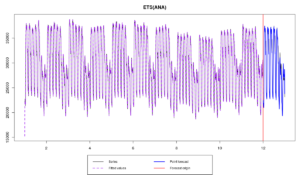 The first thing that can be noticed is the initial value of level, which results in a wrong one step ahead forecast for one of the first observations. This is because of the high number of parameters – the optimiser could not find the appropriate values. This could be not important, taking number of observations in the data, but still may influence the final forecast and, what is more important, the model selection. Some of models could have been initialised slightly better than the others, which could lead to a smaller value of information criterion for those models that should not have been selected.

This example motivates the other initialisation mechanisms.

As you see, the only thing that changes is the lower index of level component. The formula \eqref{eq:ETSANN_Forward} is used for fitting of the model to the data starting from the first observation till the end of series. When we reach the end of series, we use formula \eqref{eq:ETSANN_Backward} and move from the last observation to the very first one. Then we produce forecast back in time before the initial \(y_1\) and obtain the initial values for the components. The model is then fit to the data using these initials. This procedure can be repeated several times in order to get more accurate estimates of the initial values. In es() it is done 3 times and can be triggered by initial="backcasting". As mentioned above this method of initialisation is recommended for data with high seasonality frequencies (weekly, daily, hourly etc).

As an example, we will use the same time series from forecast package:

This time all the process takes around 7 seconds:

The graph of the model now looks reasonable: 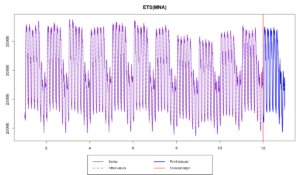 As it can be seen from the Figure, backcasting is not a bad technique and it can be useful in cases when we have a data with high frequencies. Furthermore, there is a proof that backcasting asymptotically gives the same estimates as least squares, meaning that both optimal and backcasted estimates of initial values should eventually converge to the same values.

Continuing our example, we will use classical decomposition and construct ETS(M,N,M) model

We can even compare results of this call with other initialisation methods:

Estimation in this case takes approximately four seconds (on my PC), while for initial="o" it takes around 13 seconds and for initial="b" - near seven seconds. The resulting models in these cases look very similar, with the first model producing slightly more accurate forecasts.

This method of initialisation may be used when the other two methods for some reason do not work as expected (for example, take too much computational time) and/ or when we know the values from some reliable sources (for example, from previously fitted model to the same or similar data). It can also be used for fun and experiments with ETS. In all the other cases I would not recommend using it.

There are other exciting parameters in es() that can be controlled. They allow to switch between optimised and predefined values. For example, parameter persistence accepts vector of smoothing parameters, the length of which should correspond to the number of components in the model, while parameter phi defines damping parameter. So, for example, ETS(A,Ad,N) fitted to a time series N1234 from M3 can be constructed using: 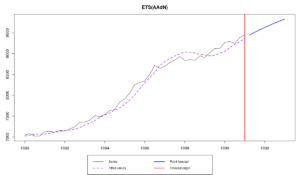 Series N1234 and ETS(A,Ad,N) fit to it with predefined parameters

with the one from optimised model: 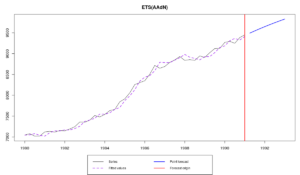 Series N1234 and ETS(A,Ad,N) fit to it with optimised parameters

I cannot say which of them is better in means of accuracy, but if you really need to define those parameters manually (for example, when applying one and the same model to a large set of time series), then you can easily do it, and now you know how.

One other cool thing about es() is that it saves all the discussed above values and returns them as a list. So you can save a model and then reuse the parameters. For example, let’s select the best model and save it: 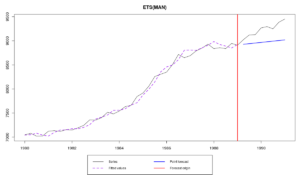 Series N1234 and ETS(M,A,N) fit to it with optimised parameters

This now results in the same model but with the updated states, taking into account the last ушпре observations: 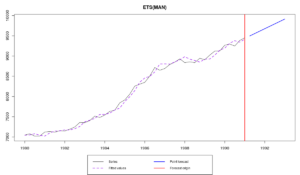 The other way to do exactly the same is just to pass ourModel to es() function this way:

This way we can, for example, do rolling origin with fixed parameters.

The function modelType() also works with models estimated using ets() function from forecast package, so you can easily use ets() and then construct the model of the same type using es():

Not sure why you would need it, but here it is. Enjoy!

That’s it for today. I hope that this post was helpful and now you know what you can do when you don’t have anything to do. See you next time!